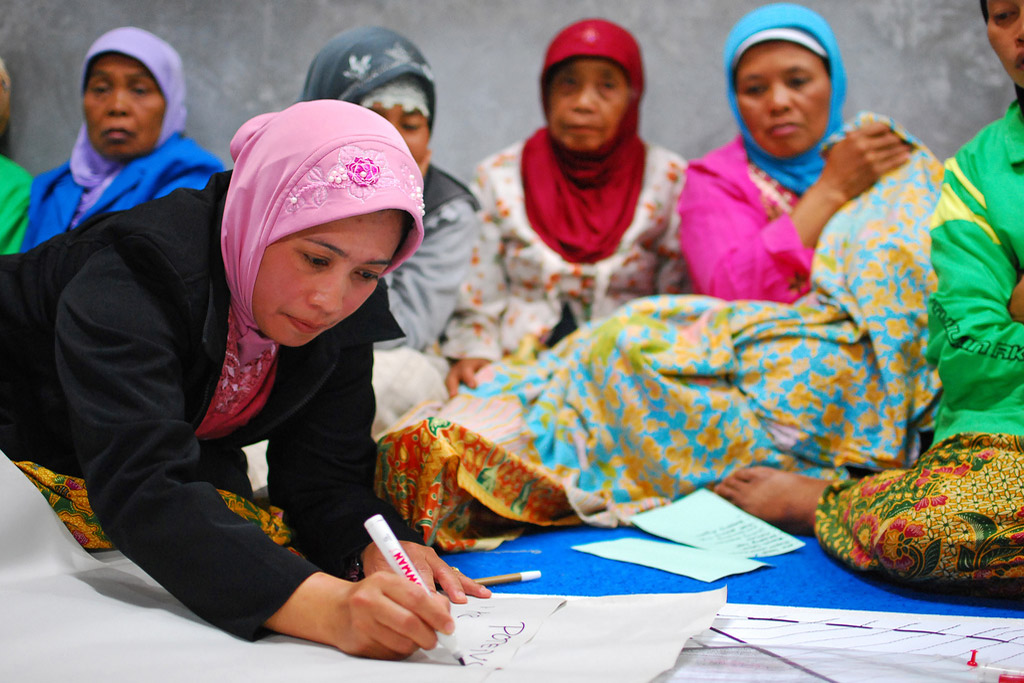 Spotlighting the positive actions of women in planning and decision-making to make their communities safer before, during and after disasters strike, senior United Nations, Government and civil society representatives today emphasized that risk reduction efforts can never be fully effective or sustainable if the needs and voices of women are ignored.

14 March 2015 – Among the dozens of events that kicked off the opening in Sendai, Japan, of the Third World Conference on Disaster Risk Reduction, a key multi-stakeholder dialogue heard participants urge greater efforts to expand and strengthen opportunities, and make full use of the leadership of women in disaster risk reduction.

When disasters strike, women are most heavily impacted but often overcome immense obstacles to lead response efforts and provide care and support, even at risk of their own health and well-being, the heads of the UN World Food Programme (WFP) and the UN Population Fund (UNFPA), told the first of the Conference’s intergovernmental high-level partnership dialogues, on “Mobilizing Women’s Leadership in Disaster Risk Reduction.”

The aim of the Conference, which wraps up Wednesday, 18 March, is to update the landmark Hyogo Framework for Action (HFA), agreed decade ago and named after the Japanese city in which it was negotiated and which details the work required from all sectors and actors to reduce disaster losses.

According to the UN Office for Disaster Risk Reduction (UNISDR), while progress has been made in the implementation of the HFA, it is widely recognized that serious gaps and challenges remain in delivering on the international community’s commitments to gender equality and women’s rights in disaster risk reduction efforts. Engagement and leadership of women as change agents in their societies are still often overlooked in disaster risk management, where women are often categorized as a vulnerable group.

WFP Executive Director Ertharin Cousin underscored that the “global reset” beginning today in Sendai – the first of a crucial series of UN-backed conferences and meetings set for 2015 respectively on development financing, sustainable development and climate change, all aimed at ensuring a safer and more prosperous world for all – must include steps to place women at the centre of disaster risk reduction efforts.

Without those steps, none of the ambitious goals proposed this year would be met. Questioning why there had been more “grey suits” in the room of the main hall when the Third World Conference had opened earlier today “than there are when we are here talking about women,” she said disasters indeed exacerbated pre-existing barriers and inequalities that women faced, putting them at greater risk of injury and death.

As such, “women must be sitting in the lead chairs during these discussions; they must be part of the decision-making; they must be part of this conversation,” Ms. Cousin said, stressing that it is time cast aside the restrictive view of women as vulnerable and merely accepting aid. Indeed, women must be recognized for who they are and the roles they undertake, which are central pillars of disaster response and recovery.

“We must recognize and mobilize women going forward…it is time to move from aspiration to implementation,” she said calling for efforts to ensure commitments made in the landmark Beijing Platform for Action, which is this year marking its 20th anniversary, as well as the Hyogo Framework.

For his part, UNFPA Executive Director Babatunde Osotimehin said the Sendai Conference offers a new opportunity for the world to galvanize around a common disaster risk reduction agenda and commit to collective actions that put women at its centre.

The fact that serious gaps remain in the area is not for lack of guidance and tools on relevant gender-based approaches and best practices. What is needed is requisite political will to make ensure that women’s voices were enhanced and participation ensured. All such efforts must bolster women’s rights, included sexual and reproductive health rights, he said.

Continuing, he suggested key actions that could be taken at all levels, stressing that dedicated resources are lacking and as such, money must be devoted to disaster risk reduction and women must be empowered to play a real role in that area. Mr. Osotimehin also said sustained and sustainable disaster risk reduction requires an accountability framework with indicators and targets to measure progress and ensure that national and local actors move towards implementation.

In a keynote address, Japanese Prime Minister Shinzo Abe said his country had endured many disasters and such harsh experiences had Japan keenly aware that the power of women is essential for risk reduction as well as reconstruction in the wake of such events.

He said that Japan had long understood the importance of enhancing the voice, visibility and participation of women. Fore example, he said that if a disaster struck during the middle of the day, most of the people at home would be women so their perspective is essential “absolutely essential for restoring devastated.”

“’No matter how much the ground shakes, we will remain calm in our hearts,’” said Prime Minister Abe, quoting the powerful words of women in one of the districts he had visited in the wake of the 2011 earthquake and tsunami, and pledging Japan’s ongoing strong commitment to ensuring all women played a greater role in disaster risk reduction.

The panel was co-Chaired by Sanae Takaichi, Minister of Internal Affairs and Communications of Japan and Loren Legarda, Senator from the Philippines.