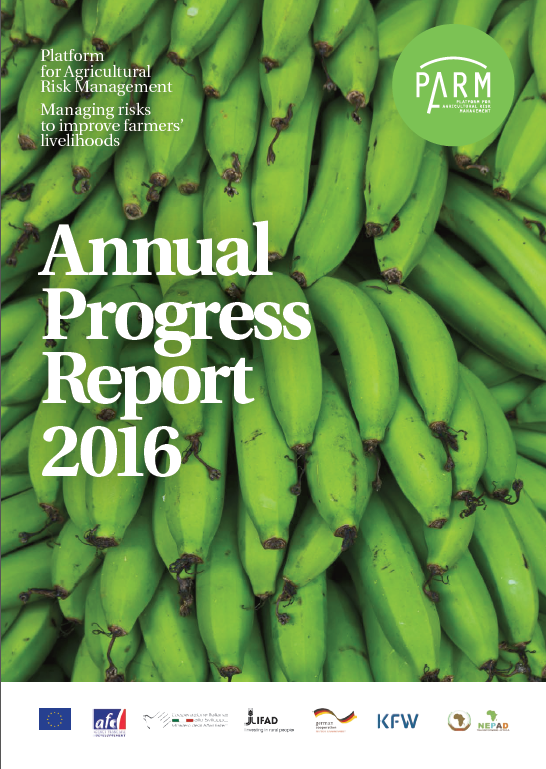 In 2016 PARM has consolidated its pillars of action and become a global reference on Agricultural Risk Management. PARM is now the Platform that brings together: the methodological rigour of the holistic approach; the inclusive and participatory process such as through the CAADP policy framework; the focus on risk assessment and management capacities on the field; and the partnership with the key experts and institutions.

After the dense 2015 global development agenda that committed the international community to a new set of Sustainable Development Goals by 2030 and achieved agreements on Disaster Risk Reduction in Sendai, on Financing Development in Addis Ababa and on Climate Chance in Paris, the year 2016 focused on setting the tools and initiatives to achieve such an ambitious set of goals. Managing agricultural risk is a key part of the new toolbox and PARM is already contributing to the achievement the SDGs.

Several PARM achievements in 2016 are milestones for the present and future of PARM and the global Agricultural Risk Management Agenda: the first finalization of a PARM country process in Uganda; the recognition by the G20 as PARM develops a closer network of partnerships; and the implementation of the mid-term review that allows looking at the future with preparedness and optimism.

“A holistic management of risks is central in the new toolbox to achieve the ambitious SGDs in 2030”. This Annual Report 2016 presents PARM achievements against the 2016 Annual Work Plan and Budget and is made available to all partners for transparency and public scrutiny. We are looking forward to constructive suggestions to improve our activities and interactions with partners.

PARM has worked in Uganda since an early stage and has accelerated the collaboration with the Government and stakeholders in 2015 and 2016 leading to a successful final dissemination workshop in Kampala on the 29th of November of 2016. The results of the workshop are built on a rigorous risk assessment study and consultation, two seminars to create ARM capacities among government officials, farmers and their advisors, four workshops and technical seminars on different matters, three meetings of the national ARM Steering committee, and tenths of bilateral and informal meetings and missions. PARM collaboration with the Government of Uganda has allowed developing an attractive package of three ARM tools and initiatives that directly respond to the priorities identified by the governments and stakeholders.

“After the PARM process, Uganda has a very attractive package of ARM investments on plant health, accessible information and local training capacities”

The discussions with stakeholders and with the Government led to three priority areas for PARM in Uganda and a comprehensive package of ARM tools: a plant health control and investment plan that tackles the most severe and frequent risk identified during the risk assessment phase; a public private partnership on Information, access to finance and a risk assessment tool, to improve farmers’ access to information and services; an initiative to create farm advisory capacities on ARM in Makerere University, extension services and service providers. Three feasibility studies or proposals have been developed in collaboration with the government and the best experts on each matter, and they have been presented and discussed with development partners in the dissemination workshop in Kampala. Several development partners and private firms engaged in the discussions and expressed interest in the three proposals.

This achievement in Uganda was a milestone showing that PARM is not only able to offer a useful policy process to identify and align priorities on ARM, it also offers as main outcome an ambitious package of complementary investments to improve the management of agricultural risks. This has been a strong motivation to keep working at the same time in all countries. In 2016 PARM was able to launch its process and be present in all its eight countries, increasing the presence and continuous engagement on the field. The Risk Assessment Studies of Ethiopia, Niger and Senegal were finalized and these three countries are already working on the final tools assessment phase of PARM. The risk assessment studies are well advanced in Cabo Verde and Cameroon after discussions with stakeholders in workshop in Praia and Yaoundé. First working meeting took also place in Monrovia and Lusaka.

PARM has significantly deepened its network of partnerships during 2016. PARM, as a G20 initiative, is monitored during the G20 meetings. Because PARM is now making quick progress, the Platform was having increasingly visible in the G20 processes. During the meeting of Ministries of Agriculture of the G20 in Xi’an on the 3rd of June 2016, PARM was among the very few global initiatives mentioned in the communiqué as main contributors to global food security and stability. In September 2016, PARM was also included in the G20 action plan for 2030 and of the Comprehensive Accountability Report (CAR) of the Development Working Group.

The interactions with the organizations that are members of the Steering Committee have been extremely dense and fruitful in 2016, well beyond the discussions during the three formal meetings per year. The close cooperation between PARM and NEPAD in the country processes have led to PARM becoming a leading partner in continental meetings such as the CAADP Partnership Platform meeting.  The collaboration with the European Commission has been increasing with the delegations at country level, but also with related EC funded initiatives such as FARMAF with a fluid information sharing and cooperation on specific tools and activities.  PARM work in Cameroun and Senegal has directly benefited from previous experience of the Agence Français de Développent in these countries. IFAD has been proactively engaged in the discussions on the ARM tools for Uganda and Ethiopia. KfW has become a member of the Steering Committee and has invited PARM to participate in its annual Rural Finance Forum in Frankfort.

The discussions and bilateral meetings with different units of FAO and WFP have been multiplied along the year. The cooperation with the World Bank has been not limited to FARMD activities such as webinars, but also to capacity development, design of risk assessment in Zambia, and identification of ARM tools in Uganda. Cooperation has extended to other partners such as the African Development Bank, the African Risk Capacity, IFPRI, USAID, the International Initiative on Impact Evaluation, CTA and many others. PARM knowledge Management activities have been a corner stone contributing to strengthening these partnerships.

The Platform is now implementing its programme at full speed, but is already learning from its experience. PARM’s Mid-term review was undertaken in 2016 by the independent consultancy firm Goss Gilroy Inc. The evaluators have interviewed staff, partners and stakeholders, including from the Steering and Advisory Committee and from PARM partners in three countries: Ethiopia, Niger and Uganda. The specific recommendations to improve the way PARM works cover areas such as increasing the presence in the countries, developing new types of partnership, and facilitating the implementation of the ARM investments. They will be immediately implemented in 2017 to improve PARM’s performance.

“PARM’s strength is based on partnership, a rigorous delivery of results and a continuous learning from experience”

After a one year extension of the PARM programme approved by the Steering Committee in November, the platform is entering in its last two programming years improving its work, and looking forward its future after 2018. The Mid-term Review has allowed initiating an early but timely discussion about the future of PARM, what we already know as PARM 2.0. These discussions will gain momentum in 2017 while PARM finalizes its processes in most of the countries and shows its capacity to align expectations and priorities on agricultural risk management. Combining the tight delivery of results in an increasing number of countries with re-thinking the future with our partners is the main challenge for 2017. Thanks to the delivery of robust results, in 2016 PARM has become a global ARM reference on methodology, policy process and delivery of solutions. The Platform is very well positioned to lead the mainstreaming of agricultural risk management as a major contribution to achieve the SDGs and improve farmers’ livelihoods. PARM is ready for the challenge of delivering results and looking at the future with confidence. The greatest risk of our time: an opportunity to reshape the way risks are managed