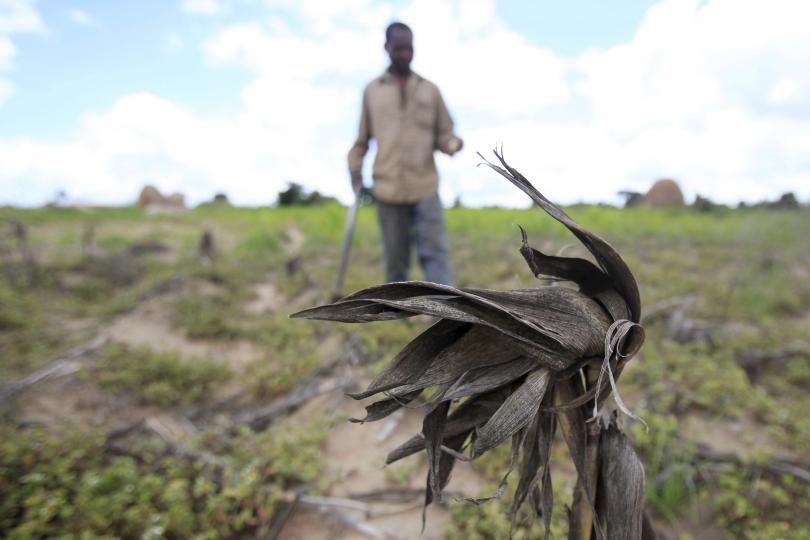 A review of some of the risks that affected agriculture in the year 2015, focusing more specifically on climate related risks, animal diseases, disasters, and price trends. 2015 was also the year of four major international conferences, which emphasized the importance of resilience and private financing for development. In these two areas, agricultural risk management (ARM) is a key leveraging factor. What is El Niño?

The first impacts of El Niño are felt in the fisheries of the west coast of South America, generally followed by an increase in rainfall in Ecuador and Peru, and a decrease of rainfall in Australia, South and South East Asia. Finally, South West Africa and countries located south of the Sahel region will be drier and warmer than usual, while Kenya will receive more rainfall. The maps below summarize the most commonly observed impacts of El Niño on rainfall patterns and temperature.

How is El Niño affecting agriculture?

El Niño events vary in strength and length. The current El Niño, which started in 2014, is one of the strongest ever recorded. This year, it has led to dryer than average conditions in Central America and the Caribbean, in Sudan and Ethiopia, and in Southern Africa. It also disrupted the Indian monsoon, leading to dryer than usual conditions in Southeast Asia and Indonesia. In the Horn of Africa, it caused above average rainfall between October and December. It is expected that El Niño will continue throughout the southern hemisphere summer season, and dissipate by mid-2016.1

El Niño has brought favourable conditions in some countries, such as Kenya or Uganda, but also had negative impacts. In Thailand, Viet Nam, and India, low rainfall levels caused decreases in rice production. In Ethiopia and in Southern African countries, droughts disrupted agricultural production.

In Ethiopia and Northern Somalia, low precipitation levels caused the worst drought in more than 50 years2. Ethiopia received an average rainfall of 480mm between March and September, well below the 600 mm average for 1990-20123 4. This poor rainfall was combined with the highest average temperatures since 1960 between March and September. As a consequence of the very dry soils and limited water availability, at least 15 million people are predicted to face severe acute food insecurity and require assistance in 2016.5

On the other hand, in western Ethiopia, Kenya, Rwanda, central and southern Somalia, El Niño brought favourable conditions and above average production in 2015.6 Uganda experienced more rainfall and thus better than average conditions in most of the country, except in the North-east region, where a below average harvest led to the depletion of stocks four months earlier than usual, in November. 7 8

In 2015, drought and flooding contributed to poor crop growing conditions and led to regional maize production that was 10 to 15 percent below average.9 This led to lower maize grain stocks and higher prices, and to a crisis situation in Zimbabwe and in the south of Mozambique. For example, in December 2015, maize grain prices in Maxixe, in the province of Inhambane, Mozambique, were 163 percent above the 5-year average and 135 percent above the same period of 2014.10 Because of the poor and erratic rainfall brought by El Niño throughout the year, planting was delayed for the 2015/2016 season, which means that the lean season in 2016 will be longer.11

According to FAO’s EMPRES-i (http://empres-i.fao.org), 2015 saw the re-emergence of  avian influenza H5N1 highly pathogenic avian influenza (HPAI) virus in West Africa. Starting in Nigeria, where outbreaks were firstly reported in January12, the virus spread to Burkina Faso in February,  and in Cote d’Ivoire, Ghana and Niger in April 13 . H5N1 HPAI virus is highly contagious  and infect both wild birds and poultry, with a very high mortality rate. The discovery of an outbreak leads to a number of control measures, including the culling and destruction of all susceptible animals and animal products in the affected unit. This causes significant economic losses. In rare cases, it can be transmitted from infected birds to humans. In Egypt, where H5N1 HPAI virus is endemic since 2006, new cases continued to be reported, in poultry as well as within the human population. Outbreaks were also reported in Israel West bank and in the Gaza Strip. The disease was also present in South, East and South-East Asia: in Bhutan, India, Viet Nam, China and Indonesia, the last two being endemic countries.14 In addition, the fourth wave of outbreak of another subtype of avian influenza virus, influenza H7N9, was declared by the FAO in October in Southern China, where it has been present since 2013.15

The spread of the lumpy skin disease continued in the Middle East, affecting Kuwait in January-February, in addition to the previous cases in Bahrain, Oman, Yemen, West Bank, Jordan, Israel, Iraq, Egypt, Turkey, Azerbaijan, Lebanon, and Iran.16 Lumpy skin disease is caused by a virus from the chicken pox family, and causes fever and skin lesions in cattle. It mainly spreads by insect bites. Although mortality is quite low, symptoms are usually quite severe, causing temporary reduction in milk production, damages of the animal hides, and temporary or permanent sterility in bulls. The mobility of the animals is also greatly reduced, which is problematic under nomadic pastoral conditions. In September, EMPRES-AH issued a warning to European countries on the potential for the spread of the lumpy skin disease from Greece and the Russian Federation to the rest of Europe.17

The foot and mouth disease (FMD) continued to spread in Northern Africa, in Algeria and Morocco, in Southern Africa, and in the Republic of South Korea.18 Since August 2015 a new FMD virus genotype has been detected in several countries in the Middle East (Iran, Saudi Arabia and Turkey).  This disease is caused by a virus, which induces high fever for two to six days, and blisters inside the mouth and feet. It leads to weight loss, and decrease of milk production in cows. In addition, the blisters can rupture and lead to impairments of mobility.  Foot and Mouth Disease (FMD) is a severe, highly contagious viral disease of livestock with significant economic impact. The disease affects cattle and swine as well as sheep, goats, and other cloven-hoofed ruminants. All species of deer and antelope as well as elephant, and giraffe are susceptible to FMD. In a susceptible population, morbidity approaches 100%. FMD is highly contagious and can be spread through aerosols, contact with contaminated faming equipment, clothing, feed, or other contaminated animals. Because the virus is highly variable, vaccines can be non-effective in case of the incursion of new strains  . According to the World Organization for Animal Health, FMD is endemic in several parts of Asia, most of Africa and the Middle East.

In December 2015, FAO/OIE/WHO issued a warning to East African countries about an increase of the risk of occurrence of rift valley fever outbreaks due to the heavy rain and flooding caused by El Niño.19 This virus, transmitted by mosquitoes, affects cattle, sheep, goats, and camels, leading to fever, anorexia, and abortions in pregnant animals. Most human cases develop a mild influenza-like illness while the disease can also manifest in humans as one of the viral haemorrhagic fevers with high case fatality rates.

These low prices are explained by an ample agricultural supply, a slowing global economy, and the strengthening of the US dollar.21

Sugar prices peaked in the last trimester of 2015, due to low rainfall levels in India, particularly in the state of Maharashtra, one of the major sugarcane production area.22 23 These low rainfall levels are also caused by El Niño, which disrupted the monsoon.

According to AMIS, price volatility for wheat, maize and oilseeds has also reduced in 2015, at the same time as prices were falling. On the other hand, the volatility of rice has increased while the global market was tightening. This changes in world price volatility need not to be fully or immediately transmitted to the price variability in local markets.

According to the United Nations Office for Disaster Risk Reduction, 98.6 million people were affected by disasters in 2015, which is well below the average of 173.2 million people affected on average per year for the period 2005-2014. In number of deaths, the most devastating disasters were the Nepalese earthquake in April (8 831 deaths), and the heat waves in France (3 275 deaths), India (2 248 deaths), and Pakistan (1 229 deaths), the numbers for India and Pakistan being probably largely underestimated.24

There were 32 major droughts, due in part to the strong El Niño, and affecting 50.5 million people. These droughts affected countries in Asia (India, Thailand), and Africa (Ethiopia). Floods are the second largest disaster in terms of people affected, with 152 floods affecting 27.5 million people, with 16.4 million in India alone. The number of fatalities from storms (996 deaths) was, however, well below the 2005-2014 yearly average (17 778 deaths), which can be linked to the improvement of early warning systems in Asian countries affected most by storms and cyclones, such as the Philippines, China, Japan and small island states of the Pacific.

2015 has been a crucial year in the development agenda, with four international conferences on disaster reduction, financing, development and climate bringing together governments, international organisations and the civil society to launch a new dynamic for the next decades.

In March, the Third United Nations Conference on Disaster Risk Reduction in Sendai articulated the objective of “preventing new and reducing existing disaster risk through the implementation of integrated and inclusive measures that prevent and reduce hazard exposure and vulnerability to disaster, increase preparedness for response and recovery, and thus strengthen resilience’’.

In July, the Third International Conference on Financing For Development in Addis Ababa highlighted the importance of domestic resource mobilization, and of private investments in sustainable development, particularly in technology and infrastructure. ARM provides a key set of tools to leverage resources for agricultural investment.

In September, the General Assembly of the United Nations met in New York to approve the Sustainable Development Goals for 2015-2030. These 17 universal goals are set out to eradicate poverty and hunger, while protecting our planet and all its natural resources. The second Goal, to “End hunger, achieve food security and improved nutrition and promote sustainable agriculture”, is directly linked with agricultural risk management practices, as they are essential to providing inclusive access to food.

In December, the first universal climate agreement was signed in Paris at the 21st Conference of the Parties of the United Nations Framework Convention on Climate Change. This agreement aims at keeping global warming well under 2 degrees Celsius in 2100, with a further goal of keeping this warming at 1.5 degrees. An important part of the agreement is about bringing resources for adaptation to climate change in developing countries.

The first is the absolute need to build resilience, be it in the context of disaster preparedness, adaptation to climate change, or leveraging financial resources for development. Building resilience means building capacity to adapt to change, regardless of its speed: sudden events and shocks have to be managed with ARM tools, and slow-onset changes, linked particularly to climate change, have to be anticipated.  Information, risk awareness, preparedness and contingent thinking and specific tools are crucial contributions of ARM to resilience.

The second is the necessity to find new ways to finance development. The necessity to mobilize private funding is clearer than ever, and this means that development needs to be financially attractive to private firms. Here again, risk management is crucial: farmers, private firms and financial institutions are reluctant to invest in risky activities, but if part of the risks can be managed, then their incentives to invest will be higher. Adequate risk management will increase private investments in traditionally risky businesses, contributing to a virtuous cycle of trust and stability.