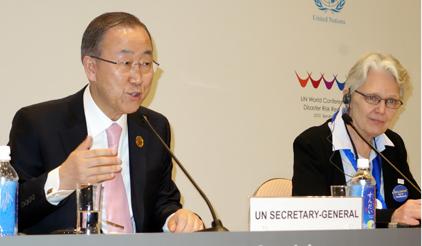 04 June 2015, GENEVA – The head of the UN Office for Disaster Risk Reduction, Margareta Wahlström, today welcomed the UN General Assembly’s endorsement of a new global plan to reduce deaths and injuries, the numbers of people affected and economic losses arising from disasters.

Ms. Wahlström said: “The UN General Assembly has moved quickly to endorse the Sendai Framework for Disaster Risk Reduction which is a sign of strong political support to move ahead on implementation. It is also significant that it agreed a second resolution calling for the creation of an intergovernmental working group on indicators which will enable measurement of progress in achieving the targets over the next 15 years.”

The Sendai Framework was adopted at the Third United Nations World Conference on Disaster Risk Reduction in Sendai, Japan, on March 18 following a decade in which over 700,000 people lost their lives, over 1.4 million were injured, 23 million were displaced and economic losses were over $1.3 trillion.

Ms. Wahlström said: “The UN General Assembly has endorsed a major shift in emphasis from disaster management to disaster risk management. The world has ample evidence that the creation of new risk can be avoided and existing levels of risk can be reduced if we eliminate underlying drivers of risk such as non-compliance with building codes, inappropriate land use and destruction of eco-systems.

“It also important to note that the Sendai Framework has extended the scope of disaster risk management to include both natural and man-made hazards with particular reference to environmental, technological and biological hazards and risks.”